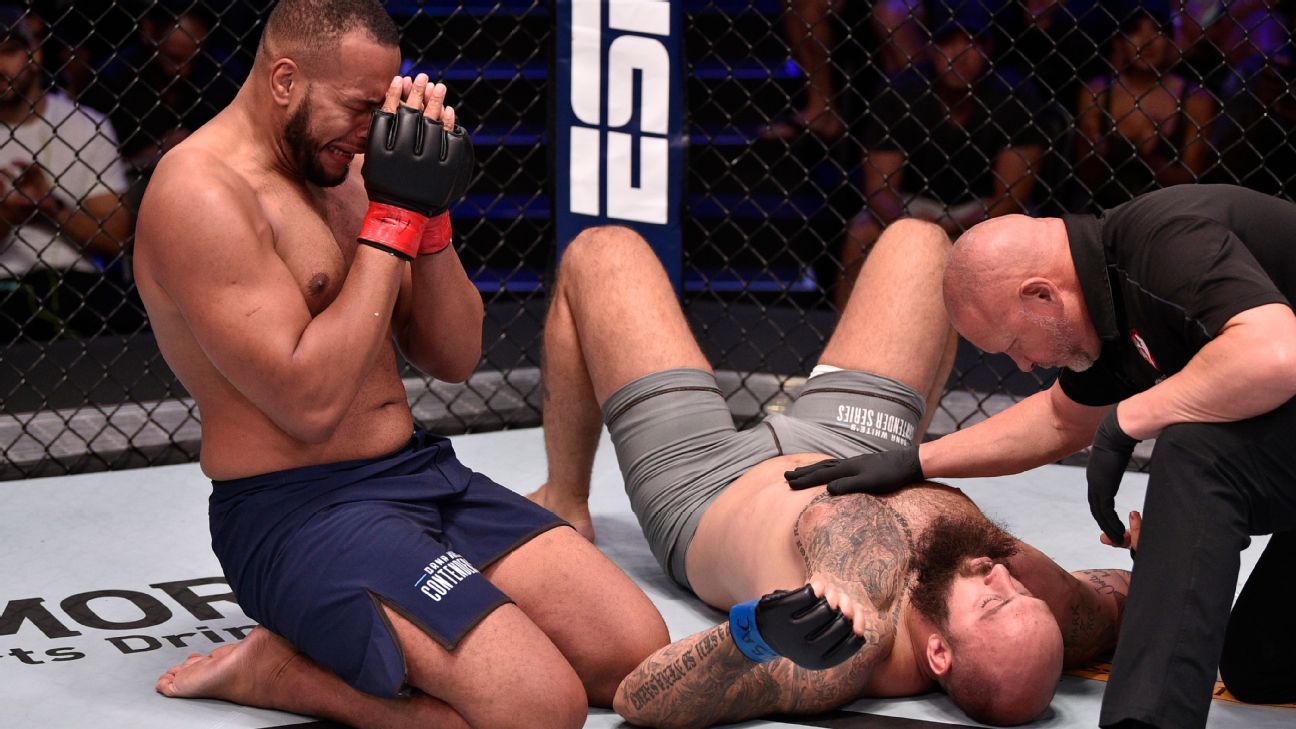 The UFC awarded contracts to four athletes, two of whom ended their fights in spectacular fashion with flying knees. Light heavyweight Aleksa Camur (5-0) knocked out Fabio Cherant with a flying knee 48 seconds into the second round, and featherweight Aalon Cruz (8-2) floored Steve Nguyen with one at the 4:36 mark of the final round.

Cruz’s flying knee was especially stunning, as it came in the final 30 seconds of a competitive, back-and-forth affair. White immediately motioned to Cruz that he’d just earned a UFC contract.

The title picture in the welterweight division should clear up when the UFC hits Newark, New Jersey, on Saturday. In the main event, top contender Colby Covington takes on former champion Robbie Lawler, with a title shot likely next for Covington should he earn a victory. “Chaos” is on a six-fight win streak but hasn’t fought in over a year. Lawler, meanwhile, hasn’t won in the Octagon in over two years.

“This is actually my first knockout,” Cruz said. “I drill flying knees all the time, but I rarely throw them in fights. He’s such a forward-pressure fighter. I hit him with one earlier, and he caught my leg. There were 30 seconds left in the round; I thought I might as well throw it.”

White said, “He’s exactly what I’m looking for. No secrets: I already showed my hand earlier with him. He’s in.”

In addition to Cruz and Camur, who is a sparring partner of former heavyweight champion Stipe Miocic in Cleveland, the UFC signed women’s flyweight Tracy Cortez (5-1) and heavyweight Rodrigo Nascimento (7-0). Cortez defeated Mariya Agapova via unanimous decision, while Nascimento submitted Michal Martinek in the first round.

Despite failing to secure a finish, Cortez, 25, delivered an inspiring performance in her sixth professional fight. The Arizonian fights in memory of her late brother Jose, who passed away in 2011 from germ cell cancer. Jose was also a professional fighter, whose dream was to fight in the UFC. Cortez wears a tattoo on her shoulder of Jose wearing a UFC shirt.

Cortez ate some big shots early on from Agapova, a striker out of Kazakhstan, but eventually worked her grappling and dominated on the ground en route to a decision.

“When they first walked out and they squared off, and this girl [Agapova] looks like Joanna Jedrzejczyk in her stance and she starts lighting Tracy Cortez up, I’m like, ‘Oh, God, this is going to be really one-sided,'” White said. “I was right, but with the wrong person. Her story, she almost made me cry like three or four times tonight.

“She’s got a ton of heart, ground, standup. She only knows one thing: to move forward. I can’t say enough good things about her.”

For Nascimento, of Brazil, it was his sixth career win inside the first round. White mentioned the promotion may have a fight lined up for him as early as August.

The only winner on the night to miss out on a contract was welterweight Daniel Rodriguez, who took a unanimous decision over Rico Farrington. The bout was mostly a standup affair, although Rodriguez made a habit of scoring late takedowns in each of the three rounds.