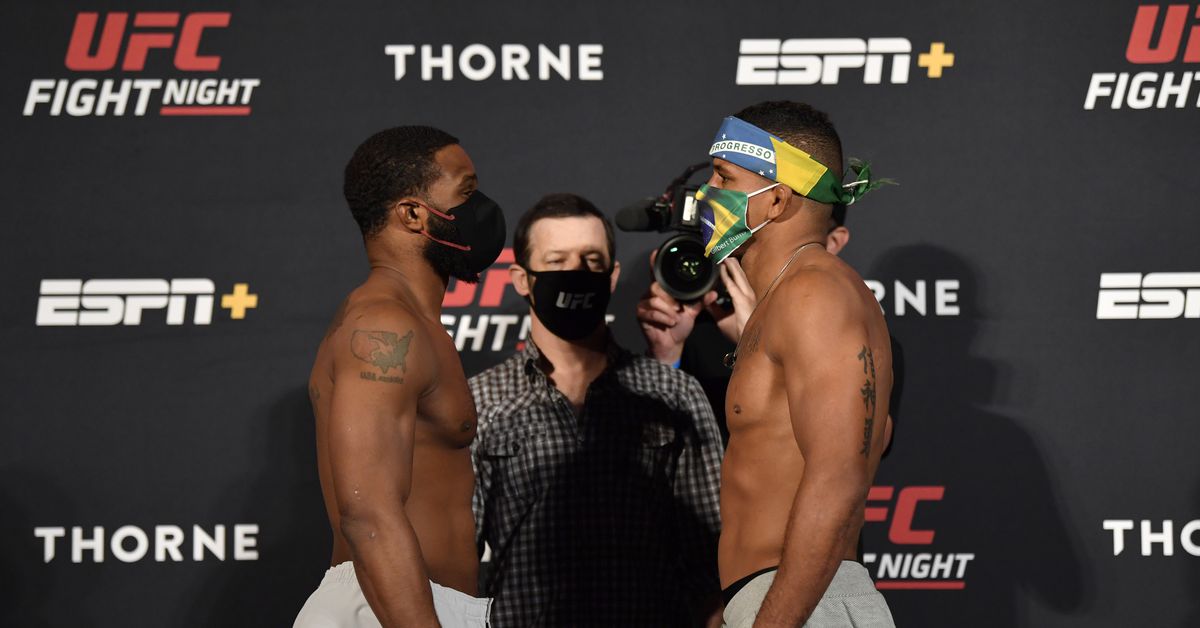 This is the UFC on ESPN 9 live blog for Tyron Woodley vs. Gilbert Burns, the welterweight headliner for Saturday’s fight card at UFC APEX in Las Vegas.

Woodley returns to the cage for the first time after losing the welterweight belt to current champ Kamaru Usman in March 2019. Burns makes a quick turnaround after a knockout of Demian Maia at UFC Brasilia in March.

Check out the UFC on ESPN 9 live blog below.

Round 1: Herb Dean is the third man in the cage for this main event. Burns races across the cage to claim the center. After an initial feeling out period, a heavy exchange and Woodley is hurt from a few right hands! Woodley’s butt is on the canvass and Burns jumps on him. Burns is firing right hands looking for the stoppage but Woodley does a good job of surviving. Now Burns has moved into mount and he’s smothering Woodley. Woodley is bleeding heavily from the head. Woodley is trying to power his way up to his feet but can’t do it against the BJJ world champion. Burns is maintaining the mount up against the cage but he’s not landing many big shots. Burns finally does posture up and Woodley immediately stands up. Great escape from the former champion. 90 seconds left in the round and this one is not going as planned for Woodley, as he has a big cut over his left eye. Woodley throws a big head kick that is blocked. Burns has landed a few good low kicks. Body kick and left hook from Burns lands. The round ends without much else. Sensational start for Gilbert Burns.

MMAFighting scores the round 10-8 Burns.

Round 2: The cut over Woodley’s eye is going to be a big problem if this fight goes on. Woodley lands a pair of right hands to start the round though. Burns is pressuring and throwing low kicks, while Woodley is loading up on right hands, headhunting. Woodley is starting to see the attacks from Burns a bit better now, still not a lot of offense from the former champion though. Woodley steps in with a big right hand and Burns ducks under beautifully and scores a clean double-leg takedown! Woodley has full guard against the cage and is looking to stand but Burns is controlling well. Woodley does eventually stand up but he eats a few shots for his troubles. Burns is controlling Woodley in the clinch along the fence that is very unexpected. Woodley reverses position but only briefly. Burns reverses again and then Woodley. The round ends with both men still in clinch position.

Round 3: The cut man has done a good job on the gash over Woodley’s eye but that’s not the issue for Woodley right now. The problem is Gilbert Burns is kicking his ass. Nothing substantive happens for the first minute of round three. Both men are feinting a lot and shots are coming up well short. Burns lands a good right hand that temporarily stuns Woodley but it’s back to a feint off. Body kick from Burns. Right hand from Burns. Woodley is lost in there now. Burns has Woodley backed up against the fence eternally now and he’s picking his spots beautifully. Woodley is clearly just looking for a big KO shot and he’s falling further and further behind. Low kick from Burns has Woodley hobbled! This is the best we’ve ever seen Gilbert Burns look. Left hook from burns lands as does a big body kick. Low kick to left hook combo stops Woodley in his tracks. Nothing much happens before the horn ends the round.