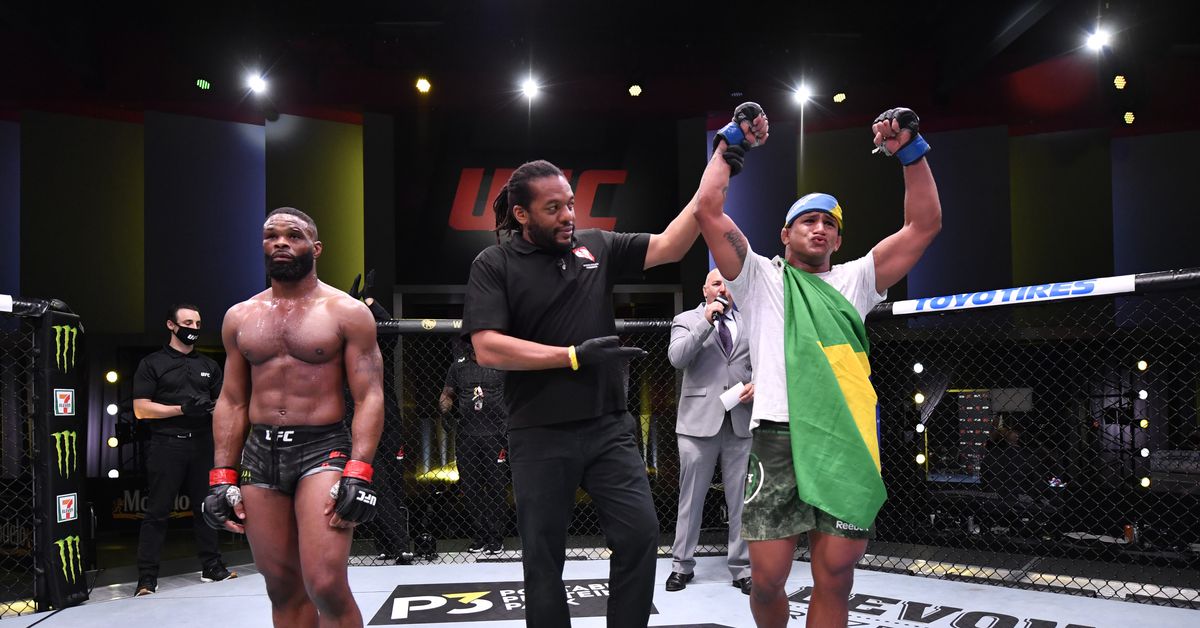 After over a year away from the cage following the loss of his title to Kamaru Usman in a one sided beatdown, Tyron Woodley hoped to return and prove to the haters and doubters that he was still the best welterweight in the UFC. Unfortunately for him, things didn’t quite play out like that. He wasn’t completely handled by Gilbert Burns like he was by Kamaru Usman … but Burns still blanked him on all three scorecards across five rounds, with two judges awarding Burns a 10-8 round in the mix.

“Like I said, you can’t just get on the camera when you win, you gotta get on the camera when you lose too,” Tyron said. “I felt good. I have no excuses. I felt good. I train hard. I was in great shape. I felt like I did everything right. Everything felt good from the walkout to the stretch, to every single thing about the fight. I looked him in the eyes yesterday and knew he was going to be ready to fight which I thought that was good. He did a good job of keeping the distance, not coming at the shots and I felt like I was reaching.”

“I have no excuses, man,” he continued. “I’m going to hold my head high. Lots of motherf**kers would have let somebody finish them off in that moment. I wasn’t going to f**king give up. I was just thinking about everybody right now who’s protesting and fighting for something good for Mr. Floyd’s family. So I’m like, ‘I just can’t give up in here’ and I never really gave up hope that I was going to win the fight, to be honest.”

“I know the first round started out rough. He kicked me in my damn leg and ever since then that motherf**ker just wasn’t right. I could not get a rhythm going. Injury wise I think I’m fine. I got a nice little cut you can’t see because I got the best plastic surgeon on earth , Dr. Greg, hook me up with stitches. I got three thousand stitches in my eye, like three or four layers of stitches because my s**t was wide open. But my leg, that motherf**ker look like it got a watermelon inside my skin.”

“I just wanted to come and face you guys because … I don’t understand, it doesn’t make a lot of sense to me, it’s not very clear … I just know I’ve got to trust God. I’ve got a weird peace for somebody who just got their ass whooped. I don’t know why I am at peace … not with losing, not with defeating, not with losing to Gilbert. Gilbert came out and did his thing. At the end of the day, it wasn’t a situation like the Usman fight where I just felt like I wasn’t there. I was there. I was present. I was responding. I heard what my coaches were saying. I just couldn’t get my hands on him.”

“I can take that,” Woodley said. “I can take a loss when I feel like I was present in my mind and body. Several times I could have just gave up, and that f**ker hit me with some s**t, I ain’t gonna lie. He hit me with a couple things, two, three, four of em. And I felt em, but it wasn’t enough to make me quit.”

“I appreciate you guys for riding with me. My sponsors too, you’ve been ride or die especially since this pandemic. And everybody, just real people. Even if you hate on me, I appreciate you too because you really don’t know me. People that know me, and get to know me, and know what I stand for, they dope. Even clout chasing Dillon Danis, I appreciate you too. Cuz you got a place in this world too. Literally driving everybody f**king crazy. Shout out to you too, I know it might be weird, but shout out to Dillon f**king Danis for trollin’ ‘In and out of love.’”

As for whether this may be the end of “The Chosen One” in the cage? Woodley certainly didn’t sound like he was done.

“I never took an L back to back so I gotta come back and let you motherf**kers know … that was not in the plans.”