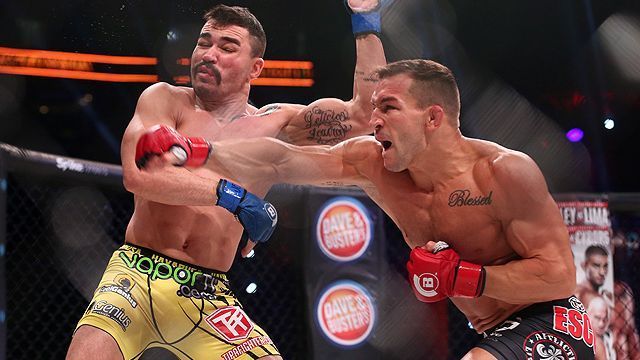 The 34-year-old former Bellator MMA champion has been one of the best lightweights on the planet for nearly a decade. He’s openly discussed the possibility of testing free agency multiple times, but Bellator has never let him get there. Through the years, Bellator MMA has always made Chandler an offer he couldn’t refuse.

And perhaps that will be the case once again. Perhaps Chandler will re-sign with Bellator, which has been his home since 2010. But for the first time in his career, Chandler is eligible to receive offers from other promotions — and there is no shortage of options.

Here are the four potential landing spots for Chandler, and how realistic each one is.

There’s no reason to dance around this: The UFC has the best lightweights in the world. Period. That’s non-debatable, and Chandler has admitted, even recently, that he hasn’t felt the adrenaline of that super-elite — let’s find out who the best lightweight in the world is — challenge since he fought Eddie Alvarez almost seven years ago.

The UFC offers Chandler the most upside, both in terms of recognition and — if the cards fall right — financially. If Chandler moves over to the UFC as a high-profile free agent and makes a ton of noise in his debut, who’s to say blockbuster fights against Nurmagomedov and McGregor aren’t in his future?

The flip side to that, however, is the UFC might ask Chandler to bet on himself when it comes to his base pay. Whereas other promotions might be willing to pay Chandler more up front to get him through the door, the UFC might offer less, but with the promise of a massive return if Chandler does his job and earns those money fights.

From a fan’s perspective, this is where you want to see him. There’s very little doubt Chandler can hang with the UFC’s best lightweights, but you’d love to see him prove it. And for the record, as much as Chandler loves what Bellator has done for his career, he’s always said he’d love to test himself against the UFC’s roster.

The list of intriguing 155-pound matchups for Chandler at Bellator is not very long. Chandler has lost to four different men in the Bellator cage. Two of them (Alvarez and Will Brooks) are no longer there. One (Brent Primus) he already avenged (and there’s no interest in a trilogy). And the fourth (Freire) is tied up in a long featherweight tournament.

With that said, Chandler still brings a lot of value to Bellator. He’s the promotion’s guy. He’s homegrown, and there’s a lot to be said for keeping your homegrown talent in-house. And Bellator has treated Chandler very well. The grass is not always greener on the other side. And even though Chandler has fought out his contract and is accepting offers, Bellator has a contractual right to match any offer he gets. And there’s definitely a chance Bellator would exercise that.

Here’s an important thing to keep in mind: Chandler wants to fight Alvarez for a third time.

These two already engaged in one of the more memorable rivalries in lightweight history. Chandler submitted Alvarez for the Bellator title in 2011, and then Alvarez evened the series with a split decision victory in 2013. A third fight between these two was booked in 2014, but Alvarez suffered an injury and ultimately left the promotion to sign with the UFC.

In recent years, One Championship has picked and chosen when to be aggressive in free agency, and there doesn’t appear to be a super-reliable way to predict when it will. But this could definitely be one of those times. Signing Chandler wouldn’t just be a good get for One Championship, it would also make its acquisition of Alvarez last year more valuable, because that’s a fight the entire MMA community would have interest in. Also, Chandler trains alongside One Championship two-weight champion Aung La Nsang in Florida.

Chance Chandler signs with One: 20 percent

If Chandler were to sign with PFL, the reasons would probably be pretty obvious. A $1 million payday if he wins the company’s next lightweight season, and a base pay per fight that would, presumably, be very competitive with any other offer.

And if Chandler were to land at PFL, a fight against Schulte could be high drama. Schulte has pretty much blitzed through his competition the past two years. Chandler’s presence would give next season an entirely different feel. And who knows? Maybe Chandler could fight PFL’s two-time featherweight winner, Lance Palmer, down the road, too.

The big elephant in the room here is that PFL postponed its entire 2020 season and currently has no official plans to host an event this year. That might be a deal-breaker for Chandler, who isn’t exactly looking to take an extended vacation immediately after his first free-agency experience.