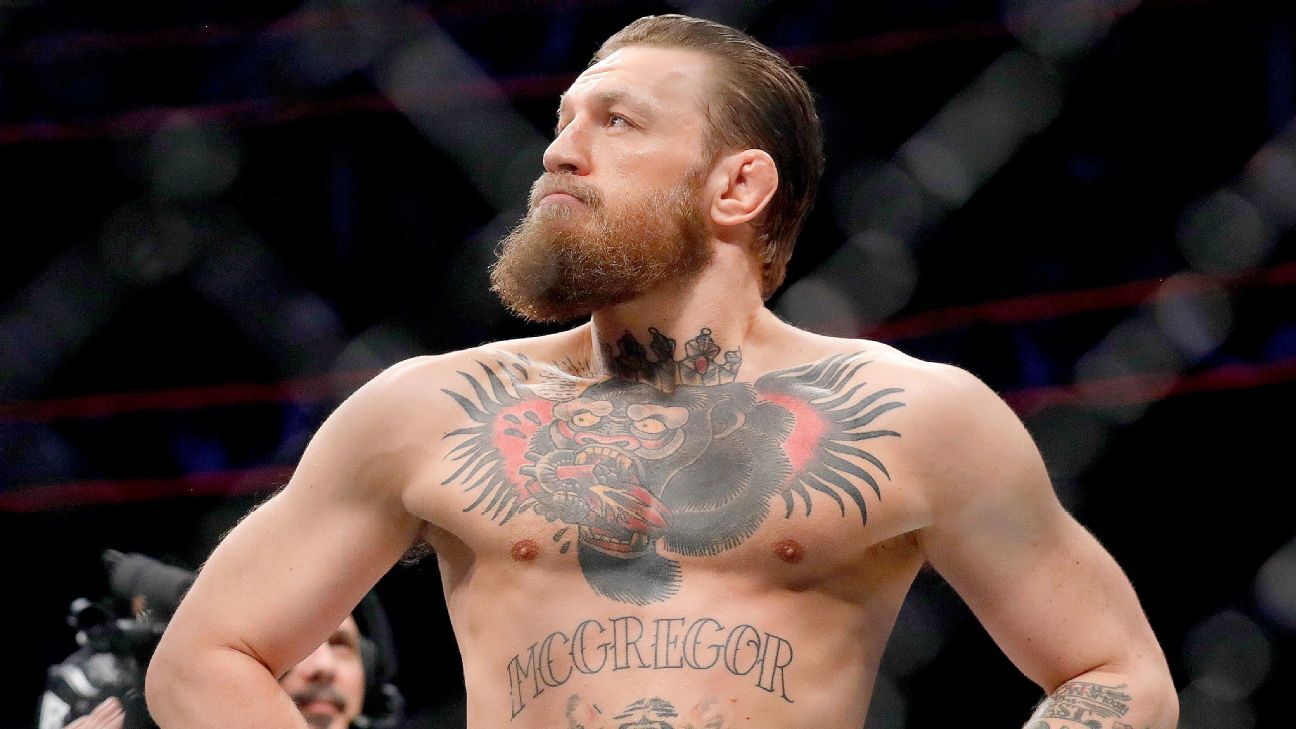 When it involves the UFC and Conor McGregor, nothing seems to come easy.

Doesn’t it always feel as if we have to endure some level of drama before getting to the end result everyone wants to see, which is McGregor competing in MMA?

I mean, just look at the past few months. That was exhausting stuff, wasn’t it?

For the record, none of it felt as if it truly crossed the line. However, I do think releasing the DMs of UFC president Dana White was a misstep by McGregor. Ultimately, nothing salacious or inflammatory was revealed, but that’s a trust-breaker that didn’t need to happen.

Saturday’s UFC Fight Night features two fights with title implications. In the main event, Brian Ortega, who is ranked No. 3 in ESPN’s featherweight rankings, will take on Chan Sung Jung, better known as “The Korean Zombie.” Jung is ranked eighth and has stopped his past two foes in the first round. Meanwhile, former strawweight champion Jessica Andrade will move up to 125 pounds and take on the third-ranked Katlyn Chookagian.

What it ultimately represented to me, though, was McGregor essentially saying enough is enough. He felt disrespected, was frustrated and snapped. He hated that the narrative being put out in the public was that he didn’t want to fight or that he was turning down fights. This after he repeatedly said his plan was to fight three times this year.

It was an unfortunate byproduct of the past few months, if not years. Truth is, McGregor and the brass haven’t seen eye-to-eye for quite some time, though they are always able to put those differences aside, because, well, they stand to make a hell of a lot of money together. And they always do.

And so, once again, all’s well that ends well, because it seems as if we are on the verge of McGregor vs. Dustin Poirier 2 happening on Jan. 23. (Though, it is worth noting that no bout agreements have been signed, and Poirier hasn’t officially agreed either, sources say.)

Unlike the booking for the McGregor vs. Donald Cerrone bout last January, this news seems to have been met with unanimous praise. Poirier looked great in his last fight, a brutal unanimous decision over Dan Hooker in June. Poirier and McGregor have a history, and if McGregor wants to fight for the 155-pound belt again, beating a top contender like Poirier feels like a fair ask.

So it’s all good. Except for one thing. One part of this equation is gnawing at me.

If the UFC’s ultimate goal is for McGregor to fight for the lightweight title again — and I believe it is, considering White said on numerous occasions before and after the Cerrone fight that a McGregor win would equal a title shot, and they even offered him the opportunity to be a standby for Khabib Nurmagomedov vs. Tony Ferguson before the pandemic — then why are they booking McGregor three months after the upcoming lightweight title fight?

The undisputed lightweight title will be on the line on Oct. 24, when Nurmagomedov fights Justin Gaethje in Abu Dhabi at UFC 254. Wouldn’t it make smart business sense to have McGregor fight around the same time as the lightweight title fight so that the schedules align?

This is a real thing in the world of the UFC. Cory Sandhagen said as much to me on Wednesday’s “Ariel Helwani’s MMA Show.” He said that he tries to fight around the time the champion in his division competes so his schedule runs parallel to the top dog at 135. That is just smart. This, in case you don’t know, is the case in every division. It’s why it made perfect sense to have the Jan Blachowicz vs. Corey Anderson fight a week after the Jon Jones vs. Dominick Reyes title fight in February, for example.

So let’s say Nurmagomedov walks out of UFC 254 relatively unscathed. Heck, let’s say Gaethje does the same. Ideally, you’d want that champion to return in the first quarter of 2021, right? Well, Jan. 23 is a long way from Oct. 24, and that timeframe all but rules out any plan for McGregor fighting for the title in the near future.

Which brings us to McGregor’s request to fight in 2020, rather than on Jan. 23, which was ultimately denied. Wouldn’t it have made a heck of a lot more sense to have him fight on either Nov. 21 or Dec. 12 — the dates of the next two pay-per-views — so that if he wins, you can turn him around to fight for the belt in early 2021? I think so.

However, White told ESPN’s Brett Okamoto on Wednesday that those dates weren’t open because they already had champions booked then. So? You think Deiveson Figueiredo, who is scheduled to defend his flyweight title against Alex Perez on Nov. 21, would be insulted if he were the co-main to a Conor McGregor fight? No chance. How do I know? I asked his team. I feel confident in saying the other two champions booked on those dates — Valentina Shevchenko and Amanda Nunes — would feel the same. Fighting on the same card as McGregor brings more eyeballs — and money.

The UFC shies away from a non-title fight headlining over a title fight, but it has happened before. McGregor vs. Nate Diaz 1 wasn’t for a belt, and it headlined over Holly Holm vs. Miesha Tate for the bantamweight title. Heck, Gaethje vs. Ferguson was an interim title fight, and that just headlined over a real title fight involving Henry Cejudo and Dominick Cruz in May.

White also said he didn’t want to move a champion off a card. That’s a good reason. It’s insulting to said champion. But McGregor never asked to move anyone off a card. Neither publicly nor privately, I’m told.

I believe the reason the UFC denied McGregor’s request to fight on either one of those cards was because it doesn’t want a fighter who stands to earn a percentage of the pay-per-view revenue, which most champions do, to reap the benefits of being on a McGregor PPV, which probably would generate somewhere between 1-2 million buys, when that fighter didn’t really have anything to do with that number. McGregor, the biggest draw in the sport, will get his percentage regardless. But the UFC stands to lose money when it has to divide the pie a little more. That’s why McGregor doesn’t fight on the same card as champions these days. He hasn’t since 2016, and any current top fighter, who is privy to PPV points, or their management, knows it’s a long shot to land on a McGregor card. It’s just understood. Now, could it happen in the future? I suppose so. But the UFC certainly shies away from it. The UFC also declined to comment for this story.

That’s the reason, I believe, the UFC would prefer McGregor fight on Jan. 23. It’s the next available pay-per-view without a champion already booked on it. Otherwise, don’t you think they’d jump at the chance to have him fight right away? Who wouldn’t want the revenue McGregor generates? I mean, if they would have booked him next month, he could conceivably be ready to go again in January.

So, to recap, this was the game of chess being played between the two sides.

• White brushes off the Pacquiao talks publicly, even though the UFC was aware of them and is on board with exploring the idea of the superfight, per sources.

• McGregor tries via Twitter to book a charity fight against Poirier.

• McGregor accepts the fight but wants it in 2020.

• McGregor agrees to Jan. 23 but wants the fight to happen at AT&T Stadium, home of the Dallas Cowboys, so that fans can attend.

If that isn’t a classic game of one-upmanship, I don’t know what is. And as of right this moment, you’d have to say the UFC won the battle: McGregor is back, and UFC doesn’t have to share his PPV percentage with anyone else.

By the way, regarding the fans in Texas, the Texas Commission of Licensing and Regulation announced recently it would allow fans to fill up to 50% of a venue, so that’s why the AT&T Stadium request was made.

Does the UFC make this happen? No word just yet.

So, in the end, McGregor gets pushed to the next available pay-per-view date, which just so happens to be three months after the lightweight title is defended.

And, in case you’re wondering, Ramadan 2021 begins April 12, which means the UFC will have only 14 Saturdays between McGregor-Poirier to book McGregor-Nurmagomedov 2, if all goes according to its plans. Nurmagomedov, as you probably know by now, is a devout Muslim and won’t fight during Ramadan or shortly thereafter.

Make no mistake about it, the UFC’s plan and hope is for Nurmagomedov and McGregor to fight each other again as soon as possible. It’s why the idea of them being coaches on The Ultimate Fighter 2.0 was out there and why White keeps saying that’s what they want.

Yes, I know Nurmagomedov doesn’t seem hot on the idea. Nurmagomedov has said he doesn’t think McGregor deserves a rematch. And it’s personal. But in the fight game, you must always follow the money, and the biggest money fight the UFC can make for the foreseeable future is that one. No doubt about it.

And ultimately it might just happen. Maybe the UFC is resigned to the idea it will happen next fall, if all goes to plan.

The good news for now seems to be that for the first time in months McGregor is closer to returning to action. When it involves the UFC and McGregor, nothing seems to come easy. But the end result is worth it.