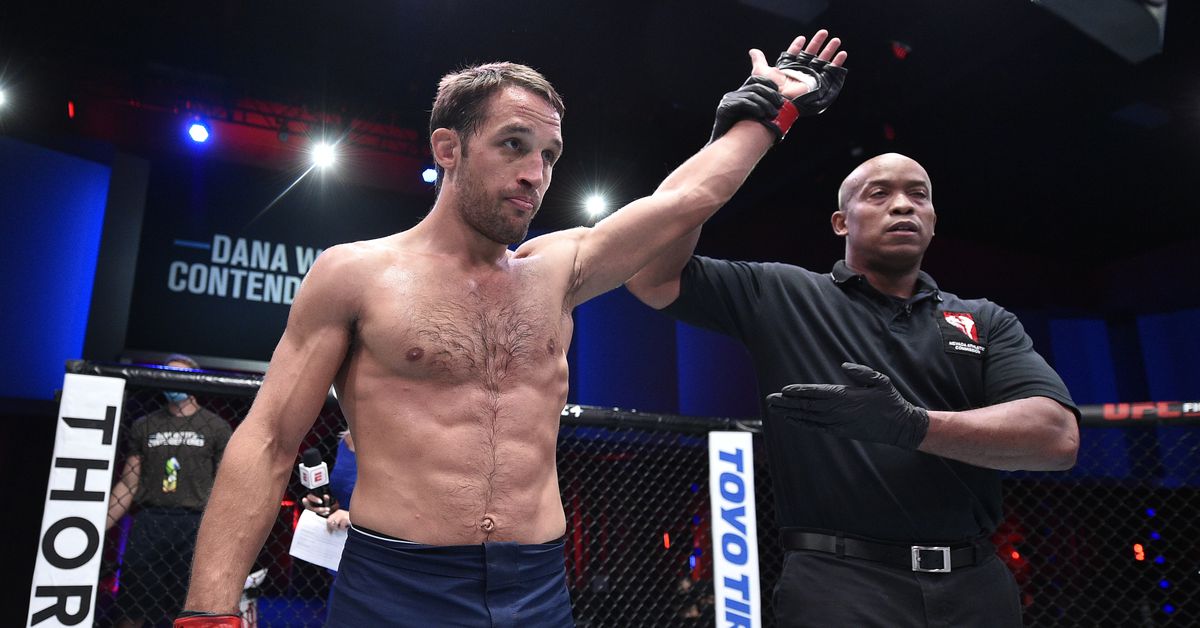 UFC 255 hits the pay-per-view (PPV) airwaves tomorrow night (Sat., Nov. 21, 2020) with some elite Flyweights in the spotlight and quality finishers among the supporting cast, not to mention a quartet of fresh faces. On this edition of “New Blood,” the series where I worry I’ll soon run out of segues, we check one three Welterweights and a promising Middleweight out of Germany.

As usual, all recent “Contender Series” bouts are on ESPN+.

Gooden — a former Titan FC title challenger — enters the world’s largest mixed martial arts (MMA) promotion with wins in 10 of his last 12 bouts, including three straight via stoppage. He was slated to debut in August on a one-month turnaround, but was ultimately forced out with an injury.

Gooden is a stalking striker who works behind a highly active jab and a regular diet of low kicks, focusing primarily on his boxing when he’s not picking at his opponents’ lead legs. His left hook in particular is quite sharp both as a lead and as a counter, though the rest of his offensive arsenal isn’t anything to sneeze at.

His defense, on the other hand, certainly is. Poor head movement and poor range management can lead him to throw low kicks from punching range and get blasted with counters in the process. In addition, he has a tendency to plant his feet and throw when backed to the fence instead of moving to a more advantageous position, which Bruno Oliveira took advantage of to blitz him in less than one minute.

He can take a good shot, but he shouldn’t have to rely on that so much.

His grappling is a similarly mixed bag. Offensively, he’s shown some solid takedowns and strong ground-and-pound. Defensively, he’s got solid footwork and reaction time to shots, but seems to struggle once opponents manage to actually lock their hands. UFC veteran Michael Graves managed to wear him down with constant takedowns, forcing Gooden to bite on feint after feint and ultimately sapping his gas tank. To his credit, Gooden always makes strong efforts to sweep or submit rather than just accept his fate, so that’s promising at least.

I’d peg Gooden as UFC-worthy, but not by much. He’s just too easy to hit and take down for his standout skills to be able to shine.

Opponent: He welcomes Alan Jouban back to the Octagon after quite some time away. Though Jouban’s got some defensive issues of his own, “Brahma” hits too hard for Gooden’s standard approach to work; therefore, expect the “Nite Train” to get smashed off the tracks sometime in the first two rounds.

Tape: You can find his Titan FC bouts on Fight Pass.

The Pennsylvania-born, Germany-based Stoltzfus hasn’t tasted defeat since his third professional bout back in 2015. He streak earned him a spot on this year’s “Contender Series,” where he stopped Joseph Pyfer via injury after a high-amplitude slam.

Power kicks, dangerous submissions and a strong clinch attack stand out among Stoltzfus’ well-rounded game. He’s a flat-foot switch-hitter on the feet, throwing solid combinations from the hip and landing hard body kicks as opponents try to retreat out of range. Those two (technical) knockout wins belie the heat in his shots, and he’s especially dangerous at close range with his knees.

That said, the lack of head movement and footwork do hamper him at times, especially when he leads with those heavy kicks and leaves himself open to return fire. If I had to name his biggest weakness, that would be it: getting caught while throwing.

What footage I found sadly didn’t show much of his offensive wrestling outside of that slam he landed on Pyfer and a couple nice takedowns two fights back. He looks fairly sound defensively, at least, save for being overly willing to jump guard on his guillotine. His submissions look sharp as well, including a quality back take and a leglock attack to go along with that guillotine.

There’s a lot to like about Stoltzfus, even if he seemingly lacks a killer app with which to overpower the division’s elite. I can see him eventually finding a place for himself in the Top 25.

Opponent: He meets another promising up-and-comer in Kyle Daukaus. Daukaus is presently a massive favorite, and while I don’t think the bookies are giving Stoltzfus enough credit, I do think Daukaus’ ground game is going to be too much for the UFC newcomer.

Cosce hasn’t been one to waste time during his nearly four years as a professional, scoring all but one of his seven professional finishes in under two minutes. He was similarly efficient in his August Contender Series main event, where he dispatched series veteran Victor Reyna with punches in just 72 seconds.

There’s only so much you can definitively say about a guy’s skills when he hasn’t even gone 90 seconds since his second pro fight. The guy just wins too damn fast, which I’m sure is a problem every fighter would love to have. Here’s what we do know: he likes young-Vitor Belfort-style blitzes, throws a mean head kick, has some impressive power and speed in his hands, and has a strong wrestling pedigree.

The list of unknowns is far bigger. He was largely untested before beating Reyna, having just one win over an opponent with a winning record, and it remains to be seen whether he can maintain that frantic pace of his for any length of time. We also don’t know about his takedown defense, ability to fight through adversity, or what happens when someone can put him on his back foot.

The only prognosis I can make is that he’s going to give us some wild fights in the Octagon.

Opponent: He faces the very limited Sasha Palatnikov, who seemingly lacks the wrestling or striking prowess to stop Cosce’s onslaught. I see another quick finish in “The Monster’s” future.

Tape: As mentioned above, check ESPN+ for the Reyna fight.

Palatnikov enters the cage this weekend as Hong Kong’s first Octagon representative. He also does so with just one blemish since his professional debut, courtesy of fellow UFC welterweight Mounir Lazzez.

The Palatnikov gameplan is simple: bounce around, throw jabs and the occasional big swing, and wait for the opportunity to land a single-leg or trip. Once that’s done, he’s usually content to chip away from guard, though he does have some decent passing chops when the situation calls for it.

There’s more to it than that, obviously, but a good chunk of it is negative. While his striking is clearly improving, it remains quite rough, and he’s far from flawless on the ground. In addition to some questionable takedown defense and an inability to do significant damage from the top, he has a really bad habit of giving up his back when trying to scramble to his feet.

In short, the man is awash in red flags.

There really just doesn’t seem to be any aspect of his game that he could reliably lean on against world-level opposition. My first instinct was to say that Palatnikov was called up too soon, but seeing as he’s already 31, I’m not sure any amount of time would have been sufficient.

In other words, don’t expect him to last long in UFC.

Remember that MMAmania.com will deliver LIVE round-by-round, blow-by-blow coverage of the entire UFC 255 fight card right here, starting with the early ESPN+ “Prelims” matches online, which are scheduled to begin at 6:30 p.m. ET, then the remaining undercard balance on ESPN 2/ESPN+ at 8 p.m. ET, before the PPV main card start time at 10 p.m. ET on ESPN+ PPV.

To check out the latest and greatest UFC 255: “Figueiredo vs. Perez” news and notes be sure to hit up our comprehensive event archive right here.