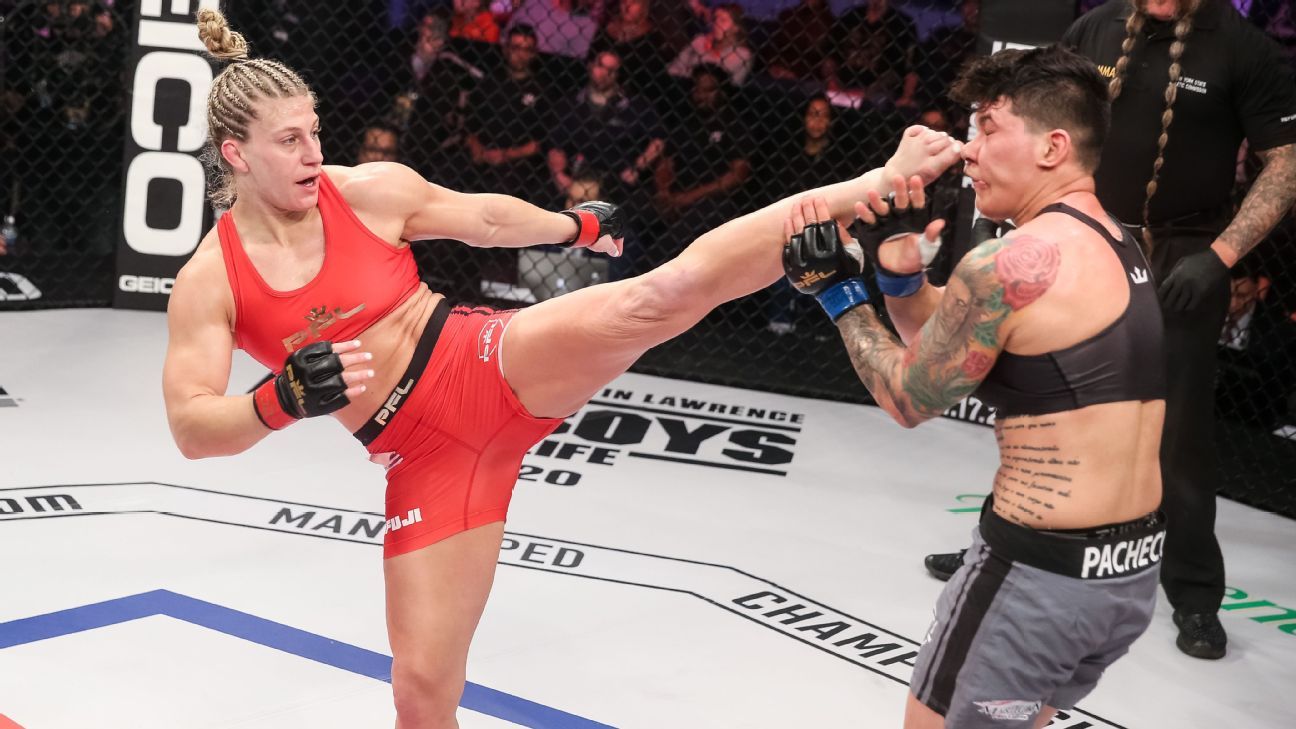 After winning two Olympic gold medals in judo, Kayla Harrison began her mixed martial arts career two years ago as a prized prospect. She has lived up to the hype, going 8-0 with six finishes and winning $1 million as the Professional Fighters League women’s lightweight tournament champion in 2019.

But Harrison is also a realist. No other major MMA organization offers a 155-pound division for women, and Harrison knows that the big-money fights for her in the future will be at 145 pounds. With the PFL having suspended its season because of the coronavirus pandemic, Harrison received permission from the PFL to compete for the Invicta FC promotion, and she recently did so at featherweight.

Harrison has been vocal about her disdain for weight cutting, but she made the 146-pound limit, and on Nov. 20 she brutalized Courtney King to earn a second-round TKO.

Harrison’s PFL contract expires in 2022, and there’s little doubt that the UFC would be interested in signing such an elite athlete. And of course, the promotion would have one particular fight in mind involving Harrison: a possible superfight against her American Top Team teammate Amanda Nunes, widely considered the GOAT of women’s MMA.

With several factors needing to be addressed, will that fight ever transpire?

One critical fight that’s indeed set to take place is Tony Ferguson versus Charles Oliveira at UFC 256 on Dec. 12. It’s a chance for Oliveira to make a huge name for himself against Ferguson, who had won 12 in a row before losing to Justin Gaethje in May. While Oliveira has won seven straight, none of those victories has come against a fighter with Ferguson’s credentials. Can Oliveira possibly become a contender at 155 with a win?

Real or not: Harrison will eventually fight Nunes.


Okamoto: This is a tough one for me. I find myself going back and forth. On the one hand, Harrison wants that fight (eventually), and I guarantee the UFC would want it, too — assuming both continue to win. And Nunes certainly wouldn’t turn it down, although it’s worth noting she doesn’t need it. And that last part is what is going to make me ultimately go with “not real.”

I don’t think we’ll ever see this fight. Or at least, I don’t think it’s the most likely scenario. There are too many things that need to go right. First off, both need to keep winning. Second, Harrison would, presumably, need to leave the PFL for the UFC — and I don’t think the PFL would make that an easy call for her. That promotion is heavily invested in the Kayla Harrison business, and it figures to do all it can to hang on to her long-term. And third, Nunes needs to keep fighting, which feels far from a guarantee. She has toyed with the idea of retirement on numerous occasions, going back years. Her legacy is secure. Will she even fight into 2022, which is the year Harrison would become a free agent?

As a fan, I hope so, but I can’t say for sure. I’d love to see this fight and I think there is a chance we will see it. But as of today, I’m going to guess it never happens.

Real or not: The Ferguson fight will prove to be a breakout moment for Oliveira.

Wagenheim: I think this is real, or at the very least a real possibility. Oliveira has won seven fights in a row, all finishes, yet he’s still mired back in the pack among lightweight contenders. This is his opportunity to step forward.

Oliveira’s string of conquests has come against fighters not quite at Ferguson’s level, but it’s fair at this point to question whether even Ferguson himself is at that elite level. He is coming off a May knockout at the heavy hands of Justin Gaethje, one of the most brutal beatdowns in recent times. What will be the residual effects?

In other words, Oliveira is getting his shot at Ferguson at an advantageous time. “El Cucuy” might be as good as new on Dec. 12, but history suggests otherwise. Fighters who get brutalized often do show the consequences in their next outing.

Ferguson, even at his best, is prone to putting himself in dangerous positions, then relying on his unorthodox knack for fighting his way out. But with Oliveira, there’s not necessarily a way out. He has 14 submissions in the UFC, more than anyone in history. Give him an inch, and he’ll take an arm.

Whatever the outcome, it’s going to be fun getting there. Oliveira has 16 postfight bonuses, the second most in UFC history. Ferguson has 11. Watch those totals grow before our eyes.

Real or not: Deiveson Figueiredo is making a mistake by turning around so quickly.

Joe Rogan is high on Deiveson Figueiredo’s performance after a first-round finish of Alex Perez at UFC 255.

Helwani: No way. This is a brilliant move on his part. First of all, Figueiredo didn’t get hurt on Nov. 21 in his win over Alex Perez. That’s most important. Second, he’ll make history when he fights on Dec. 12 because that will be the quickest turnaround for a champion ever. That’s a huge feather in his cap. Third, fans and the company simply love a fighter who turns around quickly — just ask Khamzat Chimaev. A move like this only endears him to, well, everyone, and helps expedite his growth as a star. Fourth, this will help keep his weight down. There’s no doubt he’s a big guy, but the quick turnaround will preclude him from getting too big because he agreed to this fight before he left the Apex last week. There wasn’t any time to get out of shape.

He’s sharp and in shape and has a chance to seal his fate as the 2020 male fighter of the year by headlining his second straight pay-per-view. A no-brainer if there ever was one.

Of course, he has to win, and I think Brandon Moreno is a tougher fight than Alex Perez, but it’s a risk worth taking, especially when you consider the luxury of just being able to stay in Las Vegas. Hindsight might prove otherwise if Figueiredo ultimately loses, but I like the move a lot for a budding star.

Real or not: The UFC heavyweight title will be defended more than once in 2021.

Stipe Miocic explains why Francis Ngannou deserves the next heavyweight title shot, but says the result will be the same as their first bout.

Raimondi: It has to be, right? Heavyweight has been the slowest-moving division at the top for several years. The title has been defended only five times in the past three calendar years — and three of those defenses were in 2018.

For the most part, it’s no one’s fault. Daniel Cormier beat Stipe Miocic for the belt in July 2018, then turned around pretty quickly to defend against Derrick Lewis three months later. Then, Cormier needed back surgery, which put him out until a rematch with Miocic in August 2019. Miocic beat Cormier, but suffered a torn retina in that bout, which sidelined him for a year. Miocic won the trilogy over Cormier back in August and now is unlikely to defend the belt again until the first quarter of 2021 (or later). Injuries do happen at the highest level, and we’re talking about a pair of athletes in their late 30s and 40s.

Miocic is likely to face Francis Ngannou next. If that fight does happen in early 2021 as expected, there is plenty of time for the winner to get at least one title defense in before the end of next year. If Ngannou wins and becomes champ, he’d like to defend the belt twice within 2021, a source close to the rising UFC star told me this week.

The next title challenger, regardless if Miocic or Ngannou wins, will probably be former longtime light heavyweight champion Jon Jones, arguably the best UFC champion ever. There will be major incentive for Jones and the UFC to get that fight done. Jones has not fought since last February, and if his next fight is for the heavyweight title, it will be well over a year in between fights for him. With all of those things factored in, I’m cautiously optimistic we’ll see multiple UFC heavyweight title defenses in 2021.

Dana White responds to Paulo Costa’s withdrawal and issue with pay: “You should have started a YouTube channel when you were f—–g 13 years old”
UFC 263: Adesanya vs Vettori 2 Results
UFC 263 Complete Highlights! Watch What Happened At ‘Adesanya Vs. Vettori 2’
UFC 263: Liddell, Krause, and Palmer answer burning questions about Nate Diaz vs Leon Edwards
Francis Ngannou next fight: “I want Jon Jones”