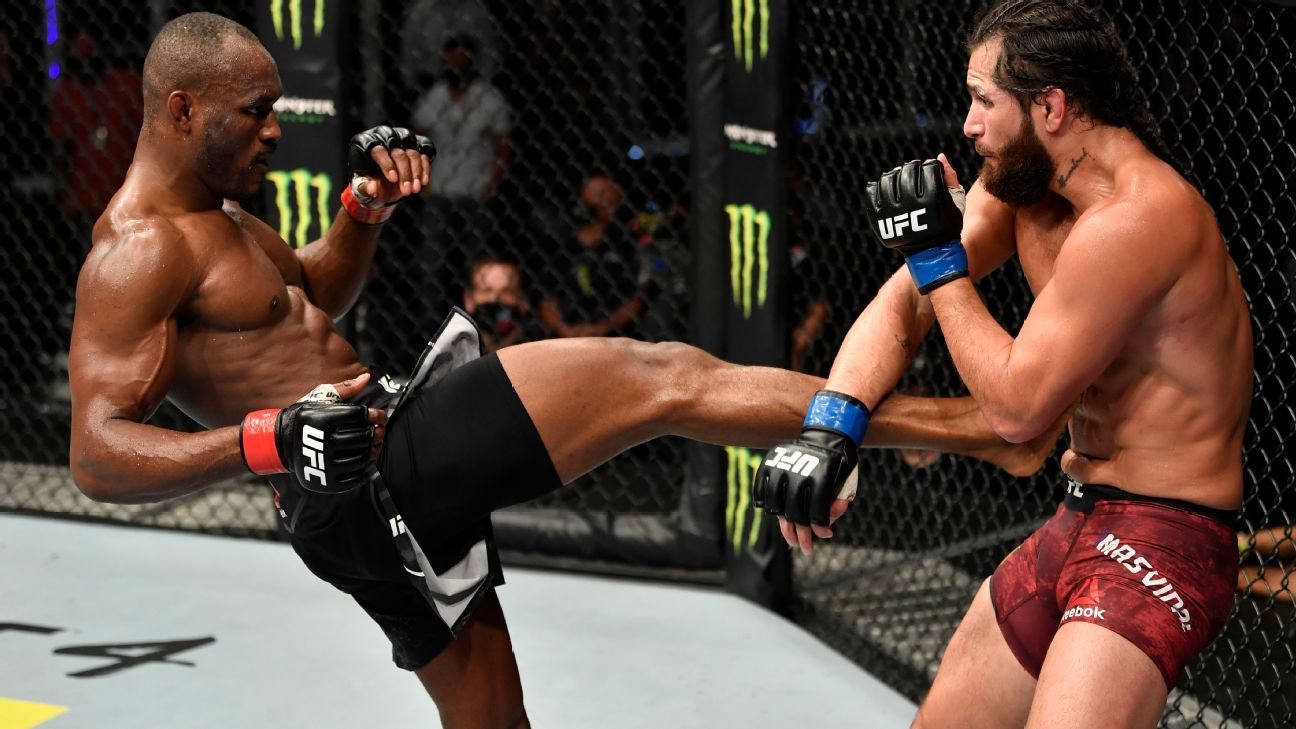 Fresh off his third UFC welterweight title defense last weekend, Kamaru Usman is keen on booking his next bout against Jorge Masvidal — and has already discussed the idea with UFC president Dana White.

Usman (18-1) told ESPN on Wednesday he believes he has earned the right to pick his next opponent, and it undeniably is Masvidal.

Usman has beaten each of the top four welterweights in the UFC rankings, but wasn’t happy with the manner in which he beat Masvidal last July. The fight was thrown together on short notice and Usman won a five-round decision at UFC 251.

“He knows he can’t beat me,” Usman said of Masvidal. “There are certain guys you just know, ‘I can’t beat that dude.’ He just doesn’t have the skills to beat me. Now, can a freak accident happen on any given day? Absolutely. But 10 times out of 10, I beat him badly, which is why I looked at him. It’s my show. I pick who I fight. At this point, I just didn’t like all the circumstances I had to deal with going into [the first fight with Masvidal], and it left a sour taste in my mouth. The s— they’ve talked has left a sour taste in my mouth. I need to put him in the ground for good.”

Usman’s manager, Ali Abdelaziz, told ESPN that although there was no official deal to come out of Monday’s meeting, the possibility of Usman and Masvidal coaching against one another on The Ultimate Fighter reality series before they fight was seriously discussed with White. Usman actually earned his UFC contract as a TUF contestant in 2015, and his mentor, Rashad Evans, was a coach in 2009.

“Kamaru said, ‘Listen, The Ultimate Fighter on ESPN, the biggest platform in the world, that’s what we want,'” Abdelaziz said. “Jorge Masvidal is a star, you can’t take that away from him, but we believe Kamaru will go out and put a nail in the coffin this time. Kamaru and Dana sat down and on our end, we’re all for it. Dana is the boss and he makes the decisions, but I think Dana is showing him the respect of giving him what he wants. It makes sense for everybody. There is no contract yet, but did Dana like the idea? Of course. Now, he has to think about it and we’re hoping it gets done on the other end.”

Usman, who broke Georges St-Pierre‘s record on Saturday by recording his 13th consecutive welterweight win, has promised to finish Masvidal in the rematch.

On Sunday, Masvidal (35-14) wrote on Twitter, “You feeling generous and I’m feeling gooned out. I’m taking everything. What’s yours is mine,” an apparent reference to Usman.

Masvidal’s manager, Malki Kawa, has proposed the rematch should take place in Masvidal’s hometown of Miami, with fans in attendance.

Usman, who lives in South Florida, said he would love to fight in Miami if the UFC agreed.