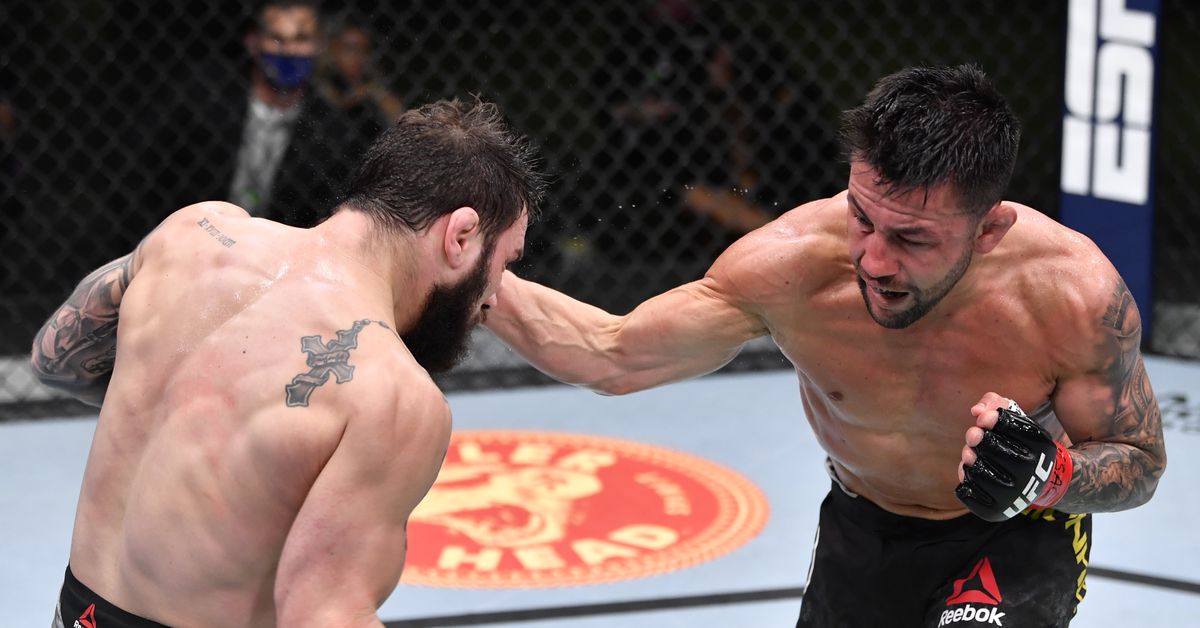 Last night (Sat., Feb. 27, 2021), Ultimate Fighting Championship (UFC) remained in UFC APEX in Las Vegas, Nevada for UFC Vegas 20. I am beginning to find it difficult to open up these recaps with getting repetitive. A big Heavyweight main event, a mix of veterans and “Contender Series” prospects, last-second cancellations … didn’t we do this last week?!? Ultimately, the UFC machine kept on keeping on last night, and fortunately, the individual fights were very fun for the most part.

Let’s take a closer look at the best performances and techniques:

A Game Of Distance

Jairzinho Rozenstruik waits on opponents to overcommit. In a sport populated by athletes who commonly fall over their feet, it’s not a bad strategy. At Heavyweight, where sloppy positioning is almost uniform, it makes plenty of sense.

Unfortunately for “Bigi Boy,” Ciryl Gane was well-aware of his strategy. More than anything else, Gane’s goal seemed to be avoiding getting creamed by a counter — which, of course, is understandable. Those punches look nasty. So, while Gane did not do anything particularly mind-blowing with his own offense, avoiding that shot and landing his own strikes proved … enough.

Ultimately, Gane doesn’t have to win every fight in highlight-reel fashion. He still showed off his skill in this victory. Jabbing and low kicking with a decorated kickboxer — even a tentative one — is impressive work, and there were certainly moments of brilliance from “Big Gamin.”

Let’s just hold off on any more main event slots for a fight or two.

Magomed Ankalaev is one of the best Light Heavyweight prospects in the world, and he dealt with a tricky challenge in Nikita Krylov. “Miner” is fearless, and he scored the first frame with a constant stream of kicks and brief moments of control.

However, Ankalaev was not bothered by losing the first frame. It took a lot of energy for Krylov to steal the opening round, and when he went to take a breath, Ankalaev’s counter right hand began crashing into his jaw.

In addition, Ankalaev reminded the fight world of his Combat Sambo background. Head kick knockouts are great, but when the going gets tough, it’s difficult to deny that a takedown and top control are the safer path. When Ankalaev actually pursued the takedown, his depth of skill in that realm and relative advantage over Krylov were revealed.

It was not flashy, but Ankalaev now climbs into the top 10 riding the division’s longest win streak. That’s what matters!

Is there a better example of the importance of calf kicks than Pedro Munhoz vs. Jimmie Rivera 2?

Back in 2015, Rivera edged out his foe on the strength of tighter punching and foot work. Both men ripped low kicks and counter punches, but Rivera was smoother and landed the bigger shots.

Since then, both have really learned to kick below the knee, but Munhoz in particular fully commits to the blow. He hardly cares what is coming back his direction — “Young Punisher” is willing to bet that his chin is more solid than his foe’s calf muscle.

Rivera tested that theory, landing murderous hooks on the chin of his foe. True to form, however, Munhoz was never badly staggered and always answered back. With just about a minute remaining in the first round, Rivera’s leg went out from under him. He fought gamely for the next 11 minutes, but from that point forward, he was really hoping for a miracle.

That’s the game in 2021. Once the calf is damaged, it’s so difficult to move or punch effectively. Rivera really did amazing work from this broken state, but it didn’t equate to long term success.

As a result of this shift, Munhoz won the rematch, and he did so in dominant fashion.