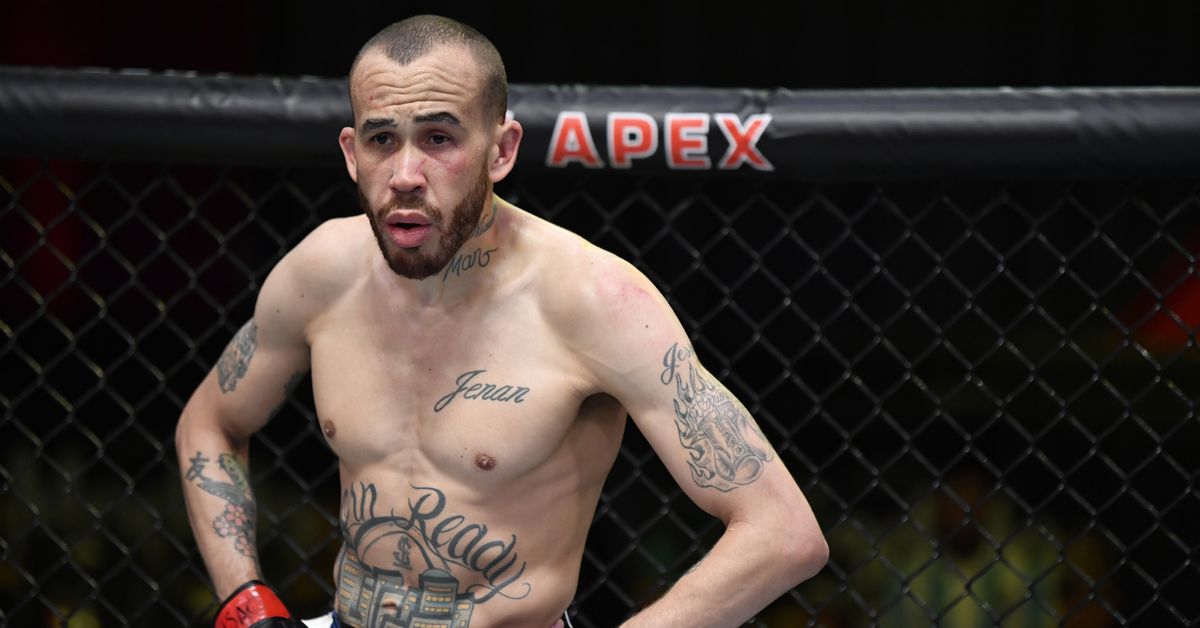 A car crash that nearly took Sean Woodson’s head off was the catalyst for his transition to mixed martial arts and eventual UFC success.

Woodson (8-1) bounced back from his first career loss with a split decision win over Youssef Zalal at UFC Vegas 28.

“It was such a serious, near-death accident that the emotional outweighed the physical for sure,” Woodson told MMAMania.com following Saturday’s card. “Still to this day driving on the highway, I have to be driving. If I’m in the car with someone, it freaks me out to the max.”

In the aftermath of the accident, detailed below, Woodson needed to train somewhere within walking distance. That car crash indirectly marked his transition from boxing to MMA, as “The Sniper” found himself a home in the dormitories of Matt Hughes’ H.I.T. Squad gym.

“I was driving. It was me and two of my friends. It was right after school, we were still in high school. We’re driving on the highway. I’m in one lane and to my right is a big semi-truck. He was ahead of me. The semi-truck driver wasn’t paying attention and the traffic in front of him had stopped. He was about to rear-end a bunch of cars. I was going about 80 [miles per hour] at the time, so he must have been going 90 [mph] or something like that. In a split-second, he slams on his breaks and turns sideways into my lane and takes up the entire lane. There was nowhere for us to go,” Woodson explained. “I slammed on my breaks and turned my car sideways.

“It was an 18-wheeler with a long trailer bed. The space in between the two sets of tires, my car perfectly — on some Fast & Furious type s—t — perfectly fit in there. We went under the truck and came out the other side. The roof collapsed in,” he added. “The people said the only thing that kept us alive was the fact that we did not have our seatbelts on. If we did have our seatbelts on, when I slammed on the breaks it would have tightened up and held us straight up. The roof got caved in so we all saw what was coming, so we ducked down and got really low. Went under the truck, came out the other side. Spun around a bunch and slammed into a concrete wall. It was a pretty bad accident. When the paramedics showed up and saw the shape my car was in, they couldn’t believe that people survived it. It was serious.”

Entering the doors of H.I.T Squad served as an immediate reality check for Woodson, who had dismissed the idea of kicking as an effective form of striking.

“That is definitely how I felt for the longest time. I was like, ‘Man that kicking is for girls.’ As soon as I went to H.I.T squad and started training, they threw me in there right away,” he recalled. “I was putting hands on the guys pretty well, but this one guy I was going with kicked me in the leg and, from my reaction, he knew right away that I didn’t know about kicks and stuff. He was a little-bitty 125er, a little dude named Josh Epps. He chopped my leg down. I was like, ‘Wow, kicking is super effective.’ That same little dude — at the time I was about 200-pounds — took me down and put me in submission-after-submission. I felt helpless. He’d get on top of me and I couldn’t get his little ass up off me. I was like, ‘Man I gotta learn all these different arts. I gotta learn all this stuff.’”

Turning on his boxing brain, Woodson also shared his assessment of Jake Paul vs. Tyron Woodley on August 28.

“I think all that stuff is goofy as hell. I feel like everybody is assuming that Tyron Woodley is going to whoop Jake Paul. I don’t see it like that,” he revealed. “That fight is going to be a lot closer and a lot more competitive than people are trying to make it. I wouldn’t be surprised at all if Jake Paul wins that fight.”

As to what is next for Woodson, the featherweight prospect wants to scrap with fellow action fighter Josh Culibao.

“I want to fight Josh Culibao,” Woodson asserted. “He’s a guy who seems like he likes to strike. I love to strike.”